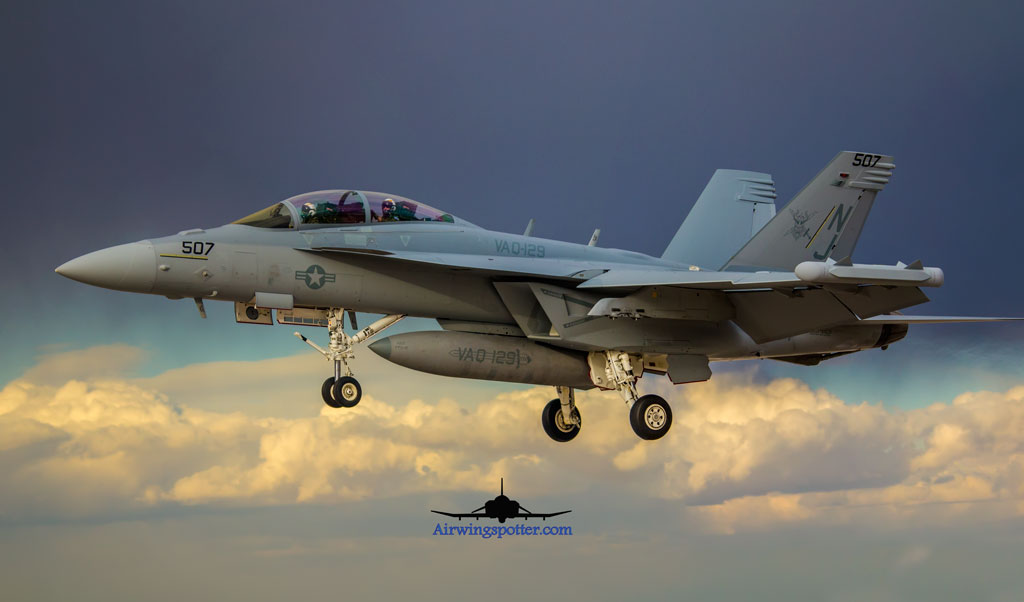 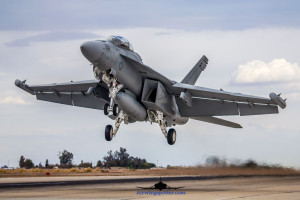 I was fortunate to be able to get into NAF EL Centro organized by PAO of El Centro. Special thanks to Kevin Whitehead who host this photocall through Fencecheck.com

The photocall session started at noon and we were greeted by the Skipper of the Base Capt. Devon Jones and PAO herself LT Michelle Dee. All photographers boarded buses that brought us to the 1st location to photograph the gate guards . At that time there were 2 EA-6B and a C2 was doing touch and goes.  The 2nd stop we were put on the center of the base and Blue Angels was doing their practice. They fired up the engine and taxi by us towards active runway . The show was awesome but a little far and lighting was not as good at that time.  The main event started when we were all dropped on the active runway and in 5 minutes we got EA-6B taxing towards the active And our scanners confirm 4 F-18 inbound for touch and goes. and I counted at least 4 T-45C loaded with training bombs taxiing to active,. it was a good 4 hrs of non stop actions. VAQ-129 CAG bird and XO bird was doing touch and goes…. T45C take off and landed in different sorties 4 at a time….. F-18E from Sidewinders take offs and land…. EF-18G from VAQ129 and VAQ-136 Gauntlets came to do touch and goes…… MV-22 took offs……Marines VMFAT-101 Sharpshooters did touch and goes and landed.  We even get to catch the Medal of Honor F-B from the Marines. Sun condition turn to be very favorable by 4pm when the Growlers and T45C was doing touch and goes and I was able to catch the “golden hour” shot with exceptional backdrop.  Sharpshooter’s F-18A came taxi out to take off right at 5:30pm and we caught her with those AB lit…. amazing view.  I was speechless. The day ended after the sunset and we visited the PX picked up some souvenirs.  This is an action packed Photocall and I would die happy knowing I have been to one in NAF EL Centro.

Here are some of the El Centro Actions:

Linda and myself made it to this fantastic air event call the Cowtown Flyin organized by the Bronco Association ….. this show was kind of unorthodox whereby the static display was very good.  I counted 7 A-10C showed up from Barkesdale and Davis-Monthan 355th FW came in. Besides that we got 4 Marines Vikings FA-18D and FA-18C one being an ATARS jet. 2 unpainted Superhornet , 2 Marine EA-6B , Marine CH46, CH53 came in also…… on the Heavies Side we got C17 , C130 from TX ANG, P3, E-2C from NAS New Orleans, 2x F-18A+ from VMFA-112 2x T1 trainer, 2x BlackSheep Sqdrn AV-8B+ …… We suppose to get some Marine Snipers F-5n but they did not show….. oh drat.

Its strictly a static display show since talking to the pilots they indicate the FAA did not clear the airport for airshow.  But being able to chat with the Flyers in the personnel manner was priceless.

Visted the Beautiful San Diego Bay and North Island in 2/2013 with my lovely wife Linda. We had a great time mainly because of the Military Heritage .. Eating great Italian food in downtown San Diego is memorable, but seeing the Pacific Fleet and USS Carl Vinson docked in North Island…… PRICELESS

Basically the bay consists of the USS Midway CV41 Museum.  Taking a ferry takes you tour the North and south end of the BAY across Coronado Bridge ….. 2 hrs gets you to see Also NAS North Island and every 10 minutes you get either a AH-1W, AH-1Z or SH-60 flying over you. C2 and F18 is also common sights.  On the south end we met a Ticon Class Cruiser  USS Princeton coming into port.