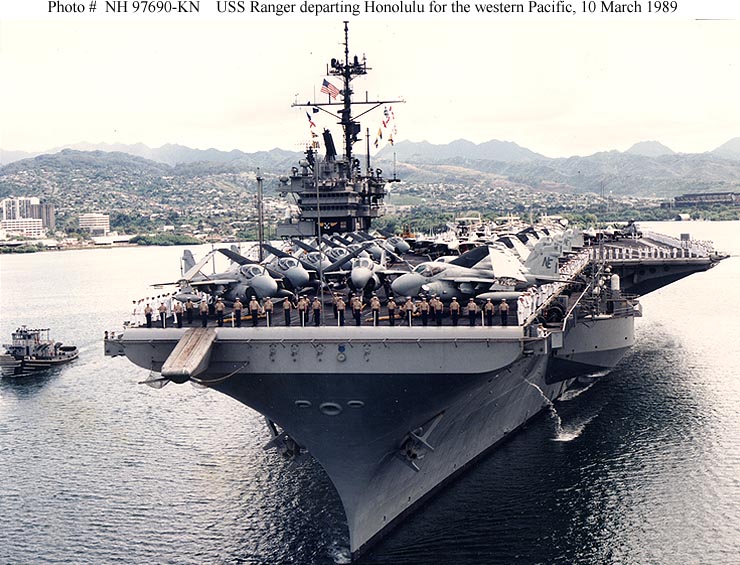 Had a chance to visit this Forrestal class Carrier in Singapore back in 1987. This was part of the Westpac Cruise by the 7th Fleet when they came to Singapore. We board the ship from Keppel Harbor and got our escort which was  2 seaman from the shore patrol.  Ranger had the heavy wing loadup on this cruise. 2 tomcat sqdrn VF-1 Wolf Pack and VF-2 Bounty Hunter , 1  S3 Sqdrn , 1x  E2C Sqdrn and 1 heavy wing A-6E with TRAM and 1 Helo SeaKing Sqdrn.  There were no A7 light attack squadron on board.  Sorry about the fuzzy photo since these are all scan in from Film pictures. and the negatives  I had was not in its optimum shape for scanning.

It was great to see these Navy jets in the transitional color scheme… the VF1 and VF2 tomcats all bear the single color grey in the semi gloss color.  The A-6E has gone to the TPS . S3 still in those colorful 80s scheme.

CVW-2 returned to Ranger in 1987 from CV-63 USS Kittyhawk, largely composed of Grumman aircraft. The “Grumman Air Wing” deployed to the Western Pacific/Indian Ocean in July 1987 flying many “Earnest Will” escort missions into the Persian Gulf. CVW-2 also flew in support of U.S. military assaults on oil platforms used as staging bases for Iranian militia attacking tankers in the Persian Gulf. From February to August 1989, RANGER/CVW-2 conducted normal patrol operations in the Western Pacific/Indian Ocean.