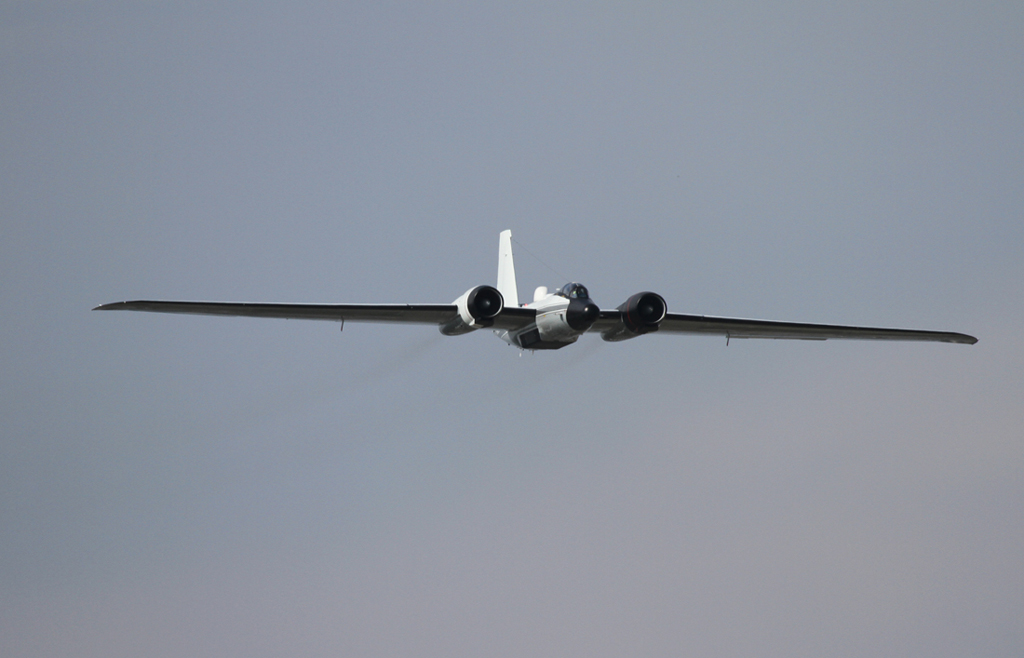 Today, I was treated to a mini air show of sorts compliments of NASA.  For the longest time I’ve been wanting to see their ER-2 (aka U2) and was finally rewarded.  Knowing that NASA has been launching the ER-2 as well as the DC-8 on Mon, Wed and Fri I started monitoring Flight Aware early in the morning to see when they were en-route so I could plan my trip over accordingly.  I left work about 3:30 pm and made the 30 minute trip down to one of my favorite spotting areas just north of the airfield off Genoa Red Bluff Road on some church property.  Great place to spot when air traffic is using 17R as they are on short final.  Once I arrived I parked under a large shade tree and turned on the scanner.  A few minutes later here come a couple of NASA T-38s who must have been doing touch and goes (can’t see the airfield from where I was) as they flew over and came back around 2-3 times.  Shortly after they landed I heard a NASA callsign reporting to the tower that they were a few miles out.  I turned to the north and saw a pair of lights and within 20 seconds or so recognized the shape.  It was the WB-57.  As I was watching it get closer here comes another NASA T-38 which made a hard left break in the overhead.  Maybe he was escorting the WB-57?  As the WB-57 got closer I noticed his gear was up and I snapped a few shots.   A couple of minutes later here he comes again.  This time with his gear down.  Time for more pics.  Once he landed it was quiet so I retreated to my car.  As I sat there fiddling around I heard what sounded like prop noise.  I looked up but at first did not see anything.  Then, all of a sudden I see the NASA P-3 pop out from behind a tree who was turning out of the NE to line up with the runway.  I had just enough time to raise my camera and snap a couple of pics all-the-while sitting in the car. Just too bad I shot it in fast jet mode as evidenced by the frozen props, LOL.  Oh well….     After he touched down it was pretty quiet.  There was no aircraft or scanner chatter.  As time went by Dave Chng and I were texting back and forth as he was so instrumental in keeping me posted on the ETAs of both the DC-8 and ER-2 since I don’t have a smart phone.  Thanks, bud!!  The funny thing was Flight Aware had their arrival times bouncing all over the place.  I lost count how many times they changed.  As we spoke to each other we laughed about it.  Finally, around 6:45 pm Dave said he was watching the ER-2 and it was descending for 7:08 ETA.  This time the ETA was correct.  As I was looking North I saw it off to the NE making a sweeping turn to line up with 17R.  The excitement grew as I was finally given the opportunity to see and photograph the jet.  I snapped as many pictures of it as I could before she disappeared behind a hill.  Within a couple of minutes of it landing here came the DC-8.

This spotting event is one I won’t soon forget.  I hit the jackpot with NASA as the ER-2, DC-8 and P-3 are first time aerial catches for me.  Thanks for making my day, NASA.