A friend told me there was a C-5C from Travis AFB on the ramp that was supposed to stay over-night.  Hearing this I had to make the trip over since a C-5 is a very rare visitor.  And, it’s the last C-5C in Travis’ inventory which made it all the more reason to make the trip.  That same friend told me that very soon this aircraft will be sent off to be converted to a C-5M Super Galaxy.  From a photographers perspective this might be one of the last times this particular jet will be photographed as a Charlie model.  So, needless to say it was an opportunity I didn’t want to pass up. 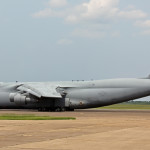 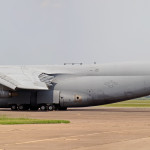 After photographing the Galaxy I drove around to other locations along the fence line to see what else there might be.  The first thing I came across was a T-6A from NAS Corpus Christi which is a frequent visitor.  What I liked about this particular one was how it had one of the engine cowling panels opened.  That was a first for me so I could not resist photographing it. 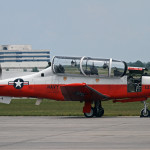 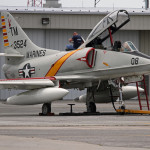 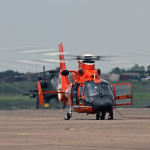 I also came across the Collings Foundation TA-4F that was being serviced over by their hangar and a US Coast Guard HH-65 Dolphin that was idling on their ramp.

Articles and pic by