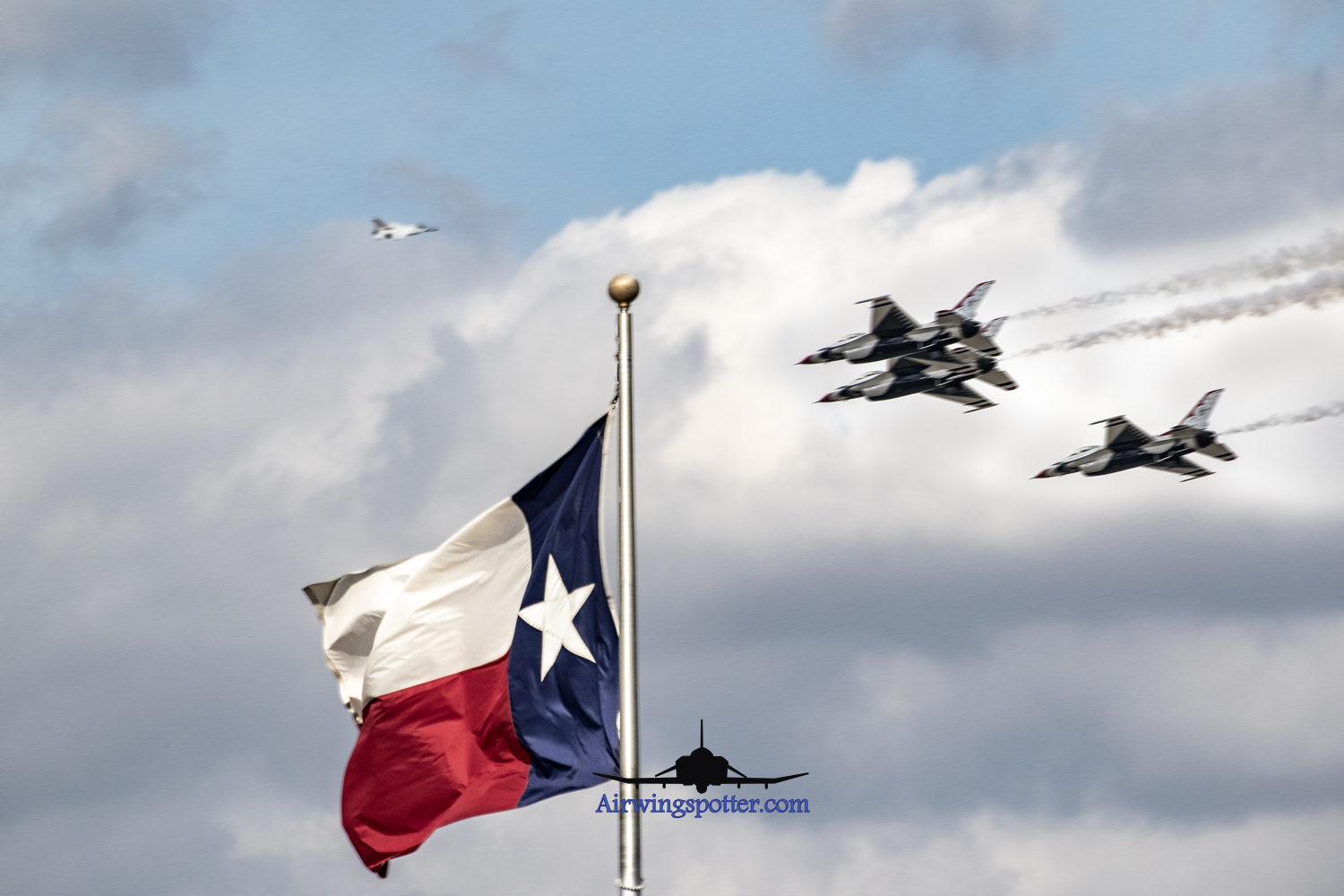 This annual airshow usually starts and end the season for us North Texan and in the year of Covid , 2020 is no exception. Due to the unique situation of Covid, Ft Worth Alliance have decided to make this a drive in Airshow to keep everyone in a social safe distance from each other. 2020 also is also Dt Worth Alliance airshow celebrating her 30th Anniversary.

As we can see cars are neatly park and air-show goers are advise to stay within the confines of their vehicle area to have the social distances. Due to the unique setup for 2020, there were no static display and food stands like the traditional airshow. We get 4 major United States Air Force Tactical demonstration teams namely A-10C, F-22A, F-35A, and C-17 and the USAF Thunderbirds jet demo team.

Flying the Lockheed Martin F-16C Block 52, T birds flew in on Thursday and have us a warm entrance.

Show day , T birds gave us very unique aerobatics and for the 2020 T bird team, one of the pilot have a new born and we have this unique 5 ship instead of the 6 ship formations that we are use to see.

Fairchild A-10C is our Air Force’s premier Close Air Support (CAS) fighter and with its slow speed and the powerful 30mm GAU-8 Gatling gun, it can destroy ground targets with precision and ease. Here you see 2 aircraft that was flown one in the Invasion Stripe use in World War 2 and the color scheme mimic the P-47 CAS aircraft use in that time. Also, on the practice day on Friday, the demonstration team uses her spare aircraft that show the camouflage pattern of the current A-10 that is use operationally.

USAF first 5th Generation fighter that wow the world for the past 10 years comes to us this year with the Langley AFB based F-22A having the FF tail code. This is one of the most maneuverable aircraft in the USAF arsenal due to the thrust vectoring exhaust of this aircraft and the ability to do non traditional maneuvers.

This year we get a unique demo from the Air Mobility Command of the USAF C-17 Globemaster III. The C-17 is the most flexible cargo aircraft to enter the airlift force. The C-17 is capable of rapid strategic delivery of troops and all types of cargo to main operating bases or directly to forward bases in the deployment area.

We get this Unique Formation flying showing off our heritage of the USAF. This 2020 Heritage flight consists of a World War 2 P-51 Mustang fighter, F-22A Raptor, F-35A and A-10C of our current USAF assets.

I would like to mention that for the Ft worth Alliance Airshow 2020, the airshow was started on Sat by our local F-16 squadron 457th FS, and on Sun, the show was started from the T-6 Texan and T-38C from Columbus AFB. For the brave men and women of our Armed Forces , I would like to take this opportunity to thank you for your service. I would like to also give a big thanks to the organizer of the Ft Worth Alliance Airshow for doing such fantastic job in organizing this airshow under such harsh circumstance as the Covid 19 of year 2020.

Article and Photographs by Dave Chng