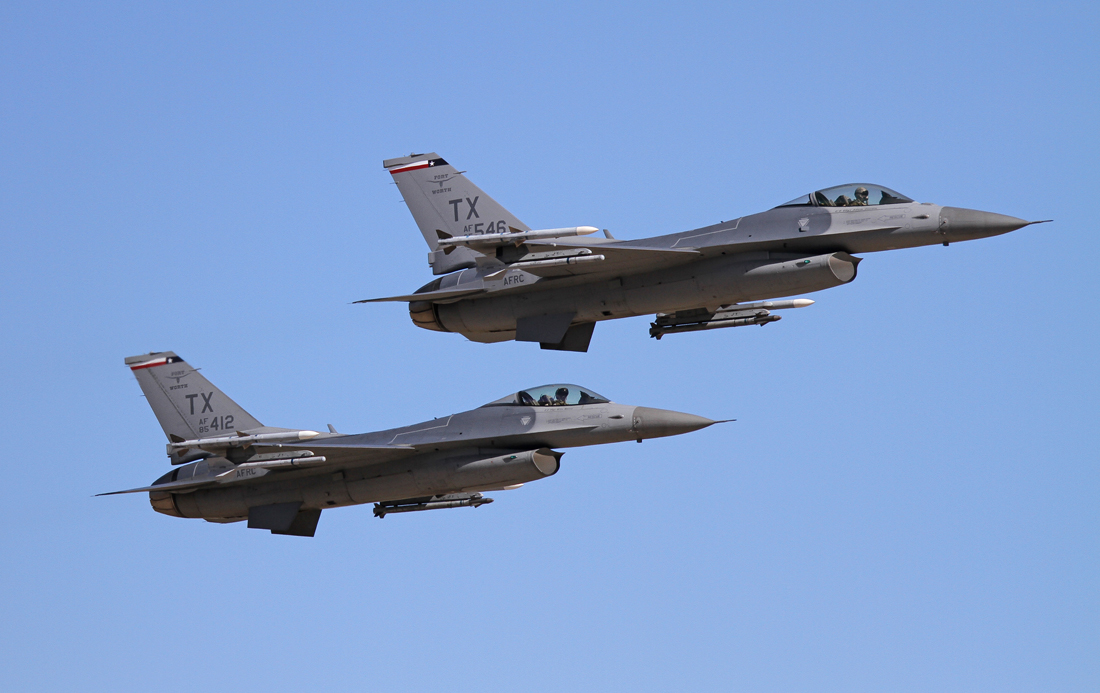 This past Friday, Feb 6th, Carol and I made the 300 mile trip north to Fort Worth, TX to NAS Fort Worth JRB for the 301 FW drill weekend. Our good friend and fellow spotter (chief editor of AWS) Dave Chng was our host / guide for the day. Dave has been telling me for a long time that we need to make the trip up to catch the Spads (F-16C unit) during drill since they launch a bunch of Vipers. And man, was he right! As suggested by Dave, we parked at the Walmart which is located on the east side of the runway as soon as we arrived which was shortly before 10am. No sooner did I get out of my car to retrieve my camera that a Nellis marked F-35A took off. I could not believe it. My first time to see an F-35 and my camera wasn’t in my hand. Drat! A few minutes later Lockheed Martin launched an F-16C chase plane that circled around and landed. And….just like that, the action began. The first sortie of the day began with the Spads launching (if my numbers were correct) 11 Vipers. Of those 11 one was a Delta model. Some flew with gas bags, missiles and targeting pods while a few others had nothing more than wing-tip mounted AIM-120s and sidewinders on underwing pylons.   It was quite a nice load-out mix. About an hour later the Spads retuned using RWY 18. And just like Dave said each one would roll to the end of the runway for the maintenance / armament crews to check and disarm them before they taxied back to their ramp. Walmart is a great vantage point to watch and photograph that as they taxi by fairly close.

A short time later, Dave met us at Walmart. From there we ventured over to the “the loop”. This is on the west side of the runway where Lockheed Blvd and White Settlement Road meet. I found this location to be quite nice. You’re perched on a hill and when looking north you have a great view of the airfield. While there we watched a Texas Air National Guard C-130H (call-sign Roper63), whose home base we were at, beat up the pattern performing a lot of touch-n-goes. We also saw a pair of E-2Cs from VAW-117 land and a C-17 from Altus AFB, OK. And then……….the Vipers launched for their afternoon sortie. This time around it was 8 that went up. Of those, it was the tandem take-off I liked best. Not too often I get to see and photograph that. Once the action slowed down Dave and I went to the north side to shoot the Viper returns. It’s a spot along the loop 820 service road close to where Cahoba Drive intersects with it. As it turned out, this is a fantastic place to catch aircraft banking on short finals.

Thank you Dave for suggesting we come up, the grand tour you gave me and most of all your friendship.