This Museum is located in the former McClellan AFB and now McClellan Business Park. A definite gem for Aviation enthusiasts and the Museum consists of an indoor exhibit that have exhibits of Aircraft cockpits like the one of a F-111 bomber and F-106 fighter. They also have a range of Ejection seats of various aircraft. Outdoor exhibition area is quite big and houses one of the most complete Cold war era military aircraft.  They have the entire century series jets from the F-100 , F-101, F-102, F-104, F-105, F-106 . Also we have seen earlier jets like the F-86D, F84, T-33. My priced exhibits come from an F-4C in Oregon ANG colors and the VF-213 F-14D tomcats.  The list of aircrafts on display is expanding as we speak so I will refer to the museum’s website for updated information. http://www.aerospaceca.org/

RAF Museum located in London, UK  I took the London ” Tube” to  Underground station in Colindale on the Northern Line, a 10 minute walk along the road gets you into this fabulous air museum. My 1st visit was back in 2004 and since than the museum have added a lot of aircraft and exhibits.  The entrance you see 3 huge hangers with a Hurricane wearing the brown green Battle of Britain colors and of course Spitfires. Also we can see a Bloodhound Surface to Air missile.

The 1st Hall is the Milestones of Flight
A time line of aviation milestones from the earliest flying machines to the 21st Century Eurofighter Typhoon test airframe ZH588. This new hall houses aircraft such as: de Haviland Mosquito, Eurofighter Typhoon, Hawker Tempest Target Tug, Early Prototype  Meteor, P51D , ME262, Hawker Harrier GR3 and many more. Here are the exhibits in this great hall. Most notable on this Hall is the All black Typhoon.. the latest and greatest of RAF jet fighters.  Also a rotating turn table of a finely restored P-51D Mustang. I was drawn to a Harrier Gr3 use in the Falklands Campaign also.

The 2nd hall is the Bomber Hall
The Bomber Hall houses an impressive number of aircraft from the legendary Avro Lancaster to the mighty Avro Vulcan. There are also US bombers such as the B17 Flying Fortress. Aircraft displays include: Avro Anson,Avro Lancaster 1 ,Consolidated B24 Liberator,HP Halifax, HP Victor K2 (Cockpit) ,HS Buccaneer SB2 ,Panavia Tornado GR1b. There is a few fighters put in the bomber hall like the infamous BF-109G2 ( The Black six), 2 seater FW-190 and a Salamander ME-163. I was drawn to the Buccaneer and they show the array of weapons like the Tilad Designator pod, LGBs . This is followed by the Tornado GR1 in the euro grey green camo. on the side we see Alarm missile, JP-233 and other Tornado’s arsenal.  There were 2 Lancaster one fully restored and another wreckage of what is left of a Lancaster … standing beside them makes you feel how big the bomber were. Another notable aircraft is a fully restore Fairly Battle bomber of the early WW2 era. Finally a Vulcan in its glory days …. with full complement of 1000lb bombs …

The Historic Hangers is the one Hall I came all the way to photograph. A vast collection of British aircraft are held in this hall, including themed displays such as flying boats and helicopters. Some of the 30 aircraft displays include:BAC Lightning F6,Bristol Beafughter,Birstol Bulldog,de Haviland Chipmunk,de Haviland Vampire,F4 FGR2 Phantom,Hawker Hunter,Hawker Typhoon,Supermarine Stranrar,Westland Wessex HCC4,Chinook, P40,Canberra, Gloster Meteor Mk 4, Jet Provost, a few Ejection seats.  Notably the F-4M FGR2 from 56th Squadron on steady alert with full AIm-9G and Skyflash and a Vulcan Gatling gun pod on the QRA alert status. A Tornado F3 was sitting right beside the Phantom. Also, Canberra Recon bird , Jet Provost trainer and the Lightning F6 in the Late barley grey camo.  After photographing these aircraft I ran out of time as the museum is coming to its closing time. reluctantly I had to miss a lot of aircraft and the battle of Britain Hall  which I will leave it for my next visit.

The other section of this Hall spots a lot of Helicopters but I was disappointed not to see a Gazelle and Lynx ( 2 of my favorite British Helicopter) They also have a section on all the Sea going Bombers like the Beaufort, Beaufighters which have some really interesting subjects.

Got a chance to visit this great Museum, this is part of the Smithsonian Air and Space Museum and in the past the Silver Hill restoration Facilities that I get to visit in the past. This has one of the most complete aircraft that is restored.  http://airandspace.si.edu/visit/udvar-hazy-center/

Here we got a Floor plan and aircraft allocation.. http://airandspace.si.edu/files/pdf/visit/Udvar_Hazy_Center_Floor_Plan.pdf

Here are some of the highlights of this Great Museum.

This great privately own Museum is situated in the Addison Airport.  He started with a Spitfire and now the collection takes up 4 hangers. Most of the aircraft are in flying conditions. This Museum also houses a good collection of Aviation Art like Robert Taylor, John Young, Stokes etc.

Here are some of the highlights of this Museum.

This Museum is a world class air musuem with so much Gem in there I cannot describe in words. They have a great collection of WW2 to Modern USAF aircraft.  Noteably the SR-71 , Rf-4C, Texan F-101, F-102, F-5E, F-15C from Tyndall, F16, F105, man! too many to name….. even have a Martin Baker Eseat for you to sit on. I have complied this when I was using some crumby point and shooot camera! so! please please that is not my level of skill in terms of photography,,,,…

Part of the museum is located inside a cave in the side of Datangshan Mountain. The cavern was originally part of the tunnels and underground bunker system of Shahe Airbase, and is 586 metres (1,905 ft) long by 11 metres (36 ft) high by 40 metres (130 ft) wide.The road leading to the museum is actually also used as a taxiway between the base and bunker system.

We manage a trip to get to the Air Museum in 2007 with the help of my good buddy Mr. Lee.  The trip was scheduled with the Air museum and PLA Armor museum .  Quite a rush trip since the museum have so much to offer.

We started with the entrance with massive array of SA-2 SAM missile and a Q5 on the stick. This was followed by rows of Q5, MIG19 type aircraft and some experimental leading to the tunnel.  Entrance to the tunnel we can see an Italian F-104 on display followed by an array of Chinese Vintage aircraft dating back to the beginning of the war.  There is Nationalist Polikapov I16, Japanese Lily Bomber . Going to the Korean war era aircraft we see rows of Aces MIG15 all in immaculate conditions. On the main display also an F-8 interceptor. and rows of Q5, J5, J6, Beagle bomber of all variants. There were some replicas of AH-64 helicopter and other western aircraft but they were not very well represented. Coming out of the tunnel we were presented with array of SAM and AAA guns.. mainly of the 12.7mm, 23mm and 57mm type AA gun of Soviet type origin.

There is a lot of PE-2 bombers, TU16 Badger type bombers, AN-2 , Q5, Q7, Q8 aircraft. A new hall representing World war 2 is being built and we saw a C-47 being off loaded from a crate and also and partly dismantle Q5

This museum is so huge I would plan another trip to come check it out….

I visited this great Museum with my Best Buddy Mr. Lee in 2012/11. a great Fall season and get to look at a fully restored aircraft namely F-8 Crusader , A-7B Corsair 2, UH-1B , F-105, F-16B. This museum is unique also by having a walkway on the top of the building so you can get a panoramic shots of the displayed aircraft.  There is also a great collections of Modern Ejection Seats that we can look at all the details. On the civilian side, Southwest airline have a 737 that you can walk in.

I had an opportunity to visit this great Armor Museum in the outskirts of Beijing.  This visit cannot have done without the help of my close Buddy Lee.  the Drive to find this base was hard since its quite unknown and lies where the PLA School of Armor is.

We finally found it after great searching and the museum entrance has a Type 95 tank as the gate guard. There is a lot of gems that is buried inside the hangers which houses all the Revolutionary war Armor use . We got mostly Russian made tanks like the SU-100, SU-76, PT-76 , T34-85 , JSU-152 , JS-2 . They have multiple copies of these great tanks. On the far end we go WW2 Japanese captured tanks and tankettes. on the outdoor exhibit we saw a few Type 59 tanks and APC.  Enjoy this series

This is the days before DSLR so please forgive me for the crude pictures. 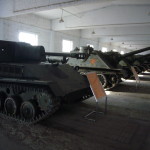 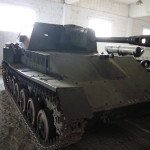 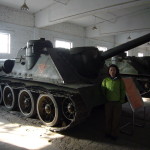 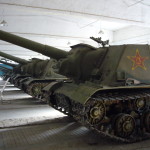 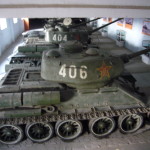 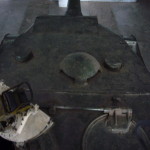 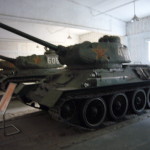 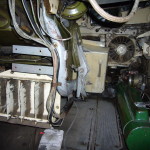 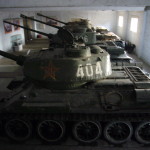 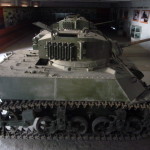 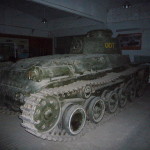 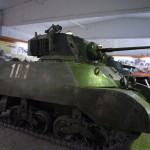 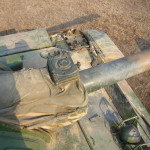 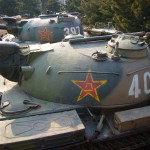 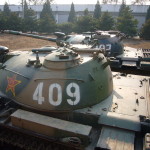 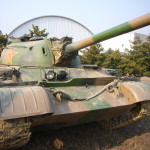