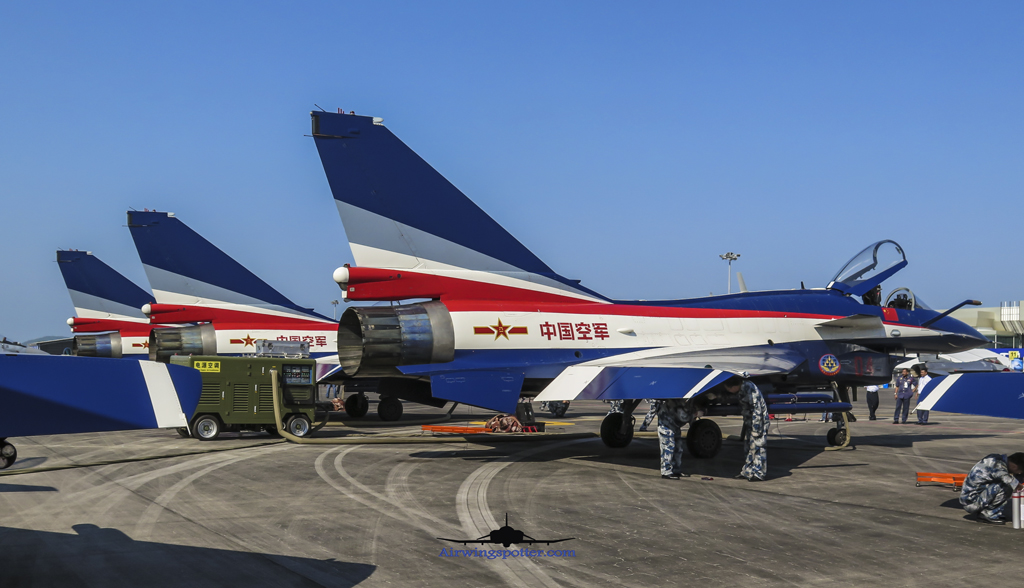 The People’s Liberation Air Force PLAAF was form in August 1st 1927.  The demonstration team was named 八一飞行 or  81st Aerobatics Team  after the date of the founding of the PLAAF. This unit was founded in 1962 and has performed 320 events and only recently that they start doing overseas demostration.  The aerobatics team is based out of Yangcun Air Force Base (Meichong) near Tianjin, home to the 24th Fighter Division. We were fortunate to capture their performance in the recent Airshow (LIMA 2015) in Langkawi Malaysia.

The August 1st aerobatic team (Ba Yi aerobatic team) initially equipped their fleet with JJ-5 fighter-trainer jets, a Chinese version of the Russian made MiG-17. In later years the JJ-5s were replaced by Chengdu J-7EB ( aka. MIG-21) , then again was replaced by the newer J-7GB (2001). The demo team consists of 8 aircraft , but only 6 are set for any airshow. In May 2009, the team upgraded their jets to the much more advanced Chengdu J-10A multirole fighter.

The aircraft of this Demonstration team lies on the J-10A and J-10SH ( 2 seater variant)  4th generation fighters use by PLAAF. This nimble fighter is known to have its roots from the Isreali LAVI project and currently, this aircraft is powered by Russian Lyulka-Saturn AL-31FN turbofan with 12000 kgF of thrust. Weapon systems pretty much comes close to an early F-16A MLU of western variants. Here we have a pictorial and video of this great aircraft at work.

We do not want to ignore the human factor and here are the hard working crews, pilots of the 81st Demonstration Team that made this demo team happen.

The 81st Demonstration Team shows the professionalism of any Flight demo team of the west. Crews are highly motivated and the show they perform was nothing but spectacular. Here are some of the actions we all see in LIMA 2015. Please click on appropriate video for each segments of the video,

Special thanks to my crew from Singapore C.B. Lee and C.N. Lau