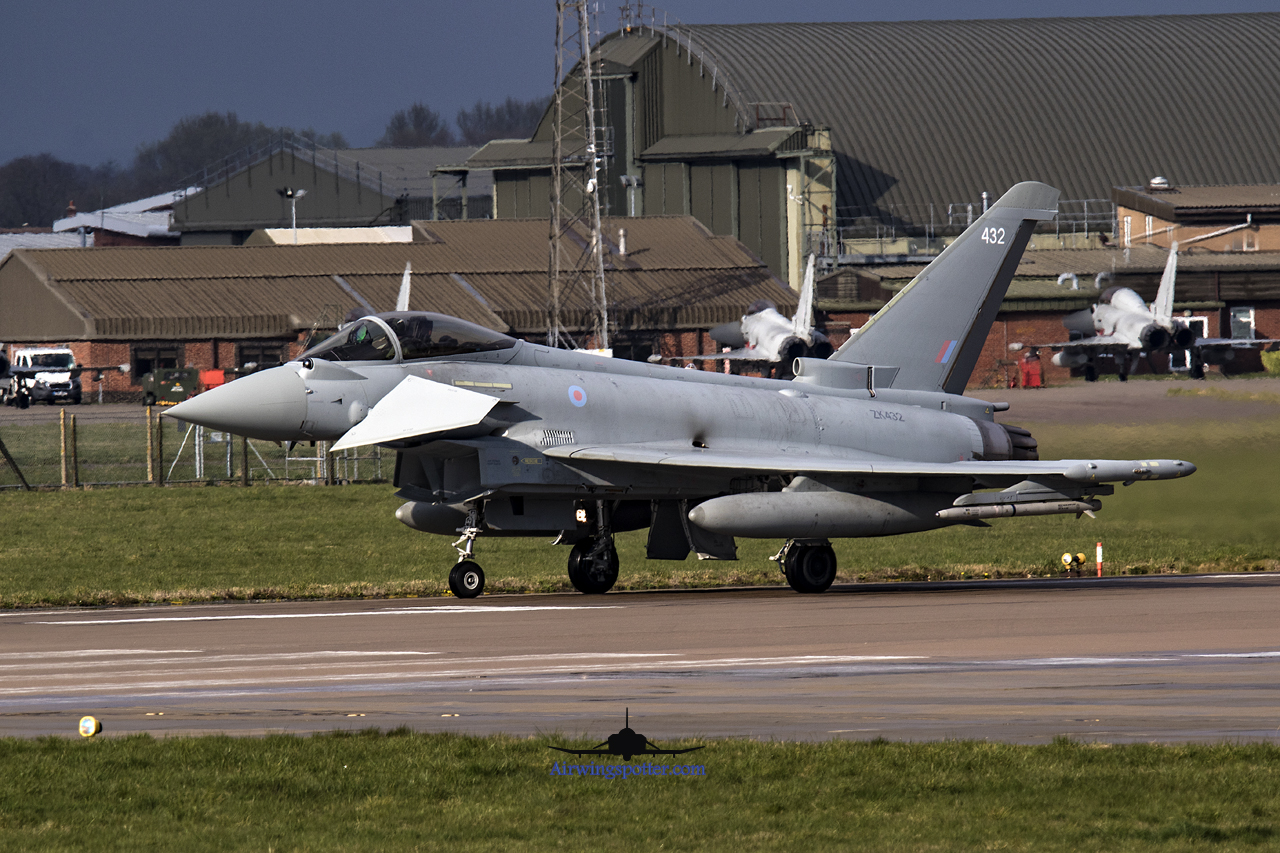 RAF Coningsby (GCY) located in Lincolnshire, UK is the main fighter base for the Typhoon FGR-4 fighter. Currently 2 main fighter squadron is house in this base namely 3rd and 11th Squadron. No 41 ( Typhoon Operational Conversion Unit) and 29 squadron (Typhoon Operational Evaluation Unit) also base here. This is also home of the Battle of Britain Memorial flight which operated World War 2 era fighters and bombers which is restored to flying conditions.

My visit to this base started with an English weather whereby rain and some sleet was pouring with visibility of less than 5 miles and a 300 ft ceiling. Like clockwork, the all weather fighter/bomber FGR-4 Typhoon came out at about 1000hrs and we were at the location of Reedham Lane.

These are definitely IFR conditions and the Typhoon never stops. We also caught 2 approaches from Red Arrows.

Moving to the end of Runway 25, we get a glimspe of 2x Typhoon on the hotramp and a single 2 squadron Typhoon coming back to land on the runway.

Rain kept pouring and got heavier as noon strikes and we decided to checkout the Old boston Road area. This location is on the same side as the control tower and taxiway. We caught the last of the morning sorties landing on runway 25 and eagerly awaiting the afternoon launch.

Right after 2pm We start to hear the high pitch of the EJ-200 Engine and we started to catch these Typhoons on the taxiway going onto Active runway 25.

The Launch and recovery was good as the weather gets some improvements and we get a glimpse of sunlight for the 1st time that day. Most Typhoon do low approaches, touch and goes and most came back with a left break in the midfield .

Since Coningsby is an active fighter base for the RAF, this base is task for defending the southern British Airspace and being beginners luck, I get to witness a Quick Reaction Alert Launch of the mighty Typhoon FGR-4. a single FGR-4 arm with 4x AIM-120 and 4x ASRAAM air to air missile was call out and took off in full afterburner. Now that is definitely a sight to behold.

Fortunately, 2nd day we got much better weather. Spotting locations in Coningsby is so good that you get all aspects of the actions of the fighters. Taxi, hotramp, take off, landing and banking shots. Nothing beats the infamous Mount of Coningsby. This location has a small mount that lets you clear the fence of the base and gets the BEST taxi shots and actions when runway 07 is active.

This is one good location for hotramp, taxi shots and here are some of the examples of them using both runways.

RAF Typhoon demo team was caught on this morning doing her 1st practice run and what a show and thanks to the English weather we got vapor all over the jet when she was screaming down the airspace. The demo show off the power , agility and lethality of the Typhoon FGR-4.

I would like to thank my good friend Gav Brudenell for giving me the English hospitality in Lincolnshire. Also getting to meet some new friends Richard and Ross . I hope to see ya’ll when jets are flying.