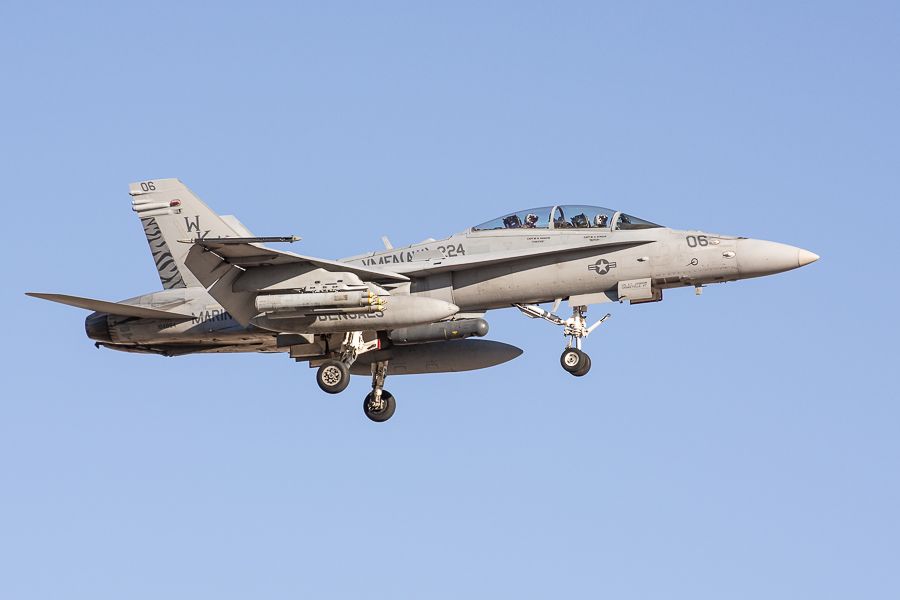 I would like to welcome our new assistant Editor Steven Valinski from AZ. He will be covering our AZ spotting . This is his 1st article on the action Arizona Style.

Weapons and Tactics Instructor Course, commonly known as WTI, is a twice-annual USMC training program conducted at MCAS Yuma. Marine Aviation Weapons and Tactics Squadron One (MAWTS–1) conducts this training to provide realistic combat experiences for USMC aviators and their support groups. This training is a combination of classroom and field training aimed at providing the closest experience to real combat strategy, tactics, and execution. Simply put, after putting in some classroom time and planning strategies, USMC aviators, and their support teams, get to “blow stuff up”.

WTI 1-14, was the first WTI exercise of the new fiscal year. I had an opportunity to spend some time outside MCAS in in an attempt to photograph aircraft as they departed and arrived at MCAS Yuma. This season’s WTI had a lot of rotary aircraft participating. AH-1’s, UH-1’s, CH-53’s, and MV-22’s were commonplace. Fixed-wing aircraft included: F/A-18’s, EA-6’s, AV-8’s, F-5’s and C-130’s. Some private contractors were hired to provide support and adversary aircraft. These aircraft included: a pair of Alpha Jets, a pair of Hawker Hunters, an L-39, and a Mi-24 Hind. Local non-WTI traffic includes F-35B’s. Other traffic included CH-46’s.

MCAS Yuma is a fairly photographer-friendly place provided photographers are respectful and do not aim their lens towards the base. The quality of the photography taken at MCAS, like many bases, is very sensitive to the position of the sun. Midday shooting can be challenging with the harsh desert sun.  The best time to shoot is after 3pm, and, fortunately, during WTI, there is a lot of activity in the late afternoon.